Sasuke was a pioneer of high-flying Japanese wrestling that blended the worlds of Lucha Libre in Mexico – where he trained for years – and Puroresu. He’s also as well-known for his eccentricities in and out of the ring, as well.

The documentary was filmed primarily in 2010 and 2011 as Sasuke celebrated his 20th year in wrestling and gave politics one last show.

The first half is very wrestling heavy while the second half is much focused on Sasuke’s political ambitions making for a odd watch at times.

Early on in the documentary footage is shown of Sasuke’s early days in Japan and Mexico and his relationship with his wife – who he met in Mexico – is also discussed as masked Sasuke eats dinner with his family as if it’s a normal occasion (Sasuke is well known for never leaving his house without his mask or being filmed/pictured without it).

A highlight of the film is behind-the-scenes footage of Michinoku Pro in its early years, including scenes involving a very young Taka Michinoku, as Sasuke tries to build his Lucha/Puru fused promotion into more of territory style promotion working smaller towns than the bigger promotions.

The focus shifts to Sasuke’s 20th Anniversary and goes into great detail on his efforts to draw a big crowd for the night. He literally goes door-to-door attempting to sell tickets and making cold calls to fans.

One of the more striking scenes appears after he wins the Michinoku Pro Junior Heavyweight Title at his 20th Anniversary event. After speaking to the media, an exhausted and hurting Sasuke practically collapses in his locker room, and the next day he is wheeling into the hospital by his son to get treatment for a torn ligament in his hip he suffered the night before.

This scene – along with brief discussion of his countless injuries and the very visible battle scars covering his body – is a small glimpse into the trauma he has put his body through over the years. His wife and children seem to imply that they would much rather he found something else to do as a career but he flatly says he wants to continue wrestling until he dies.

While it is implied by former WWE star Jinsei Shinzaki (aka Hakushi) that Sasuke’s shifting priorities caused strife for Michinoku Pro over the years, it really wasn’t tackled in depth, unfortunately.

Sasuke’s early political career – which included a stint in the Iwate Prefectural Assembly in the early 200s – is touched on and following the disastrous Pacific coast earthquakes that ravaged coastal towns in Japan in 2011 he decides to throw his hat into the political arena again.

While it is certainly intriguing to see the way Sasuke interacts and connects with the people as he campaign, this section drags and is much less interesting than the rest of the documentary especially for a wrestling fan.

After failing to regain political office, Sasuke goes back to what he knows best. Sasuke – who also served food to struggling communities – put on free wrestling events at elementary schools impacted by the earthquake. This is where Sasuke seems to be at his best. He is clearly delighted to be able to make struggling people smile, even for a few moments, and seems to have an epiphany of sorts following the event.

“After wrestling for the children today, I was reminded that the ring is where I belong,” he gleefully states. “That is my life.” 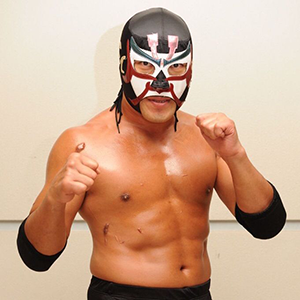 While there was quite as much focus on Sasuke’s wrestling career – especially his younger days – as I was hoping, it shows a different side of that “aging veteran” trope we see a lot in wrestling. Yes, Sasuke is beat up and he clearly is not a millionaire, but he’s also not damage goods and seems to have become content with where he is in life and his career.

There are great wrestling scenes mixed in with the documentary and also cameos from the likes of Shinzaki, Taka Michonku and others. Shinzaki actually had the most fitting quote in the whole film, that I think perfectly describes both Sasuke himself and this documentary.

“Sasuke is full of interesting ideas,” Shinzaki said. “Only Sasuke can come up with (ideas) like (he has) but he’s sloppy. That is his flaw. He can be amazing and awful at the same time.”