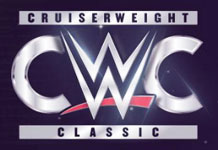 Week two of the Crusierweight Classic comes to a close in another really great night of wrestling action. I can’t rave enough about Mauro and Bryan on commentary either. Those two work so well together and it is nice to hear commentators that actually do research on guys they are calling matches for. Even when DB screws up (like when he called a “dab” another goofy dance move name) he manages to play it off by making fun of himself as being a nerd. He really impressed me when talking about Kenneth Johnson and talking about how he overcame the speech impediment and how that shows how much work ethic he has. Just great stuff from those two.

I think all of the matches were pretty good for the most part but I don’t think either of them was as good as Ibushi’s match last week. Tajiri-Slater was pretty good and was really hard hitting but Tajiri has pretty obviously slowed down enormously in recent years. The Tajiri-Gran Metalik match will give us some nice Tajiri-Super Crazy flashbacks but I highly doubt it will be able to live up to that.

Perkins looked great in his match but I didn’t care for Da Mack at all. I don’t like the dancer gimmicks as it just makes the guy look goofy as hell. Especially in a tournament like this which is being presented as much more realistic and like a MMA tournament.

Lince Dorado and Mustafa Ali was easily the best match of the night and it was a high flying wrestling fans wet dream. Both guys just flew all over the place and I was so impressed with Mustafa. I had since Lince several times in person, and even more times on DVD/video, so I knew what he could bring to the table but I had never seen Mustafa Ali before. He was incredible himself and when you have two high flyers like that in the ring together it is seriously like poetry in the ring. I loved every minute of it.

I think Kenneth Johnson has a good story and obviously stories like that Daniel Bryan is going to grab onto because he was an underdog himself, but he was pretty sloppy and just not in the same league as Tozawa and it was very glaring. They tried to do a match where Johnson could go hold for hold with Tozawa but it just came off as Tozawa looking like he was having an off night or something. Johnson’s missed Phoenix Splash was awful as he would have missed Tozawa by about three feet at Tozawa not even moved, but Tozawa’s suplexes were a thing of beauty. When he gets a chance to get in the ring with other guys in this tournament he should be better.