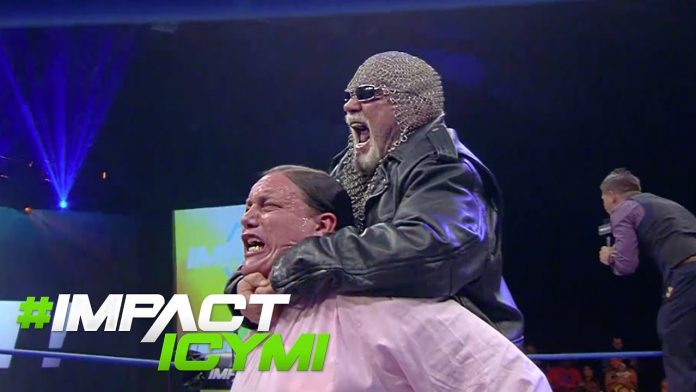 Results from the 5/25 episode of Impact Wrestling on POP TV.

* Opening segment with Bruce Prichard and Tyrus. Prichard said that EC3’s actions from last week are under review. Impact Champion Lashley comes out and wants to know who he will defend against Slammiversary. EC3, James Storm and Magnus come out and want to have their #1 Contenders Match right now, but Prichard said it is the main event and if you touch each other before then, you will be suspended.

* KM w/Sienna and Kongo Kong w/Laurel Van Ness def. Braxton Sutter w/Allie and Mahabali Shera. Sienna and LVN beat down Allie after until Knockouts Champion Rosemary came out and laid out LVN and Sienna, then motioned to Allie.

* The VOW def. Fallah Bah and Mario Bokara to advance to the GFW Tag Title Finals.

* Segment where Josh Mathews teased apologizing to Jeremy Borash and Joseph Park, but instead, wanted a match with Park. Park accepted, the bell sounded, but then Scott Steiner returned and beat down Park, laying him out with the Steiner Recliner, to which Mathews then revealed that Steiner was his tag partner against Borash and Park at Slammiversary.

* Eddie and Alisha Edwards def. Davey Richards and Angelina Love. Davey and Angelina attacked them after, handcuffed Edwards to the ropes and forced him to watch Angelina put Alisha through a table with a powerbomb.

* Rockstar Spud promo, promising to get revenge on ‘Swoogle next week.

* Main Event in a #1 Contenders Match: EC3 def. James Storm and Magnus to become the #1 Contender to the Impact Title and will face Lashley at Slammiversary.

Ronda Rousey announces she and her husband are expecting, WWE comments