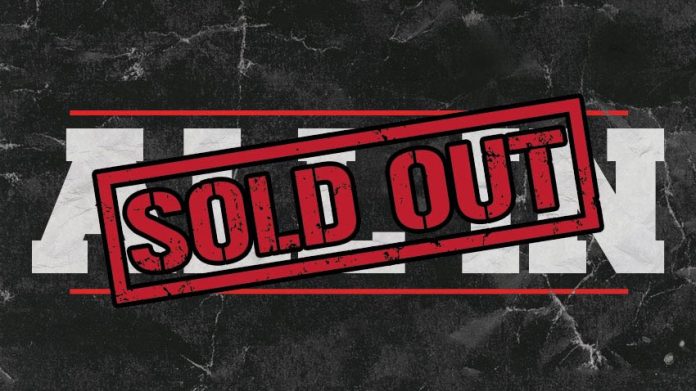 Cody Rhodes issued a tweet on Sunday evening confirming an earlier report that it appeared tickets for the upcoming All In event on September 1 were sold out.

Rhodes revealed that tickets, which went on sale Sunday afternoon, were sold out in just under a half hour officially at 29 minutes and 36 seconds.

Thank you. Very much. pic.twitter.com/imOxKUSNsC

As reported earlier, this was a big milestone for Rhodes and The Young Bucks for this self-financed independent event. The event was configured to sell 10,000 seats at the Sears Centre in Hoffman Estates (just outside Chicago), making it the first non-WWE promotion to sell that many seats in the United States in over 19 years.

No word at this time if the promotion intends to release more tickets. A good number of tickets were already showing up on StubHub on Sunday ranging from $175 to $1,995. Starrcast, the official convention partner for All In, will be releasing tickets to the public this Tuesday night (May 15) featuring talent from All In and many more wrestling names.

It still remains to be seen if the show will be broadcast live on Pay Per View or through an online streaming provider. More about the show is expected to be announced soon.

Rolling Stone spoke with Cody Rhodes and The Young Bucks about the event back in March a few months before the official venue was confirmed at the Sears Centre.

IMPACT announces the return of Lockdown, Will stream live on IMPACT Plus March 28