Steve Gerweck passed this along. 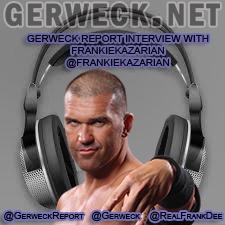 In this special edition of the Gerweck Report podcast, Steve Gerweck and Frank Dee welcome former TNA X-division and tag team champion <a href=”http://www.gerweck.net/2009/10/30/suicide/”>Frank Kazarian</a> for an exclusive interview.

– On why he is no longer with TNA, “still to this day, I have no idea .. other than being told they were going in a different direction”
– The state of tag team wrestling in the business
– On AJ Styles leaving TNA, “I was astonished TNA didn’t do everything to keep him .. I’m astonished Chris Sabin left to”
– On ROH: “Best roster in wrestling right now!”
– On Adam Cole: “light years ahead of where he should be at this age”
– The transition from TNA to WWE, and went went wrong with his WWE stint
– Training with John Cena, Samoa Joe, and Christoper Daniels in UPW
– Four sided ring vs. six sided ring
– Wrestling needing to be more edgy
– Political correctness
– On Vince Russo: “I don’t think his emphasis is on wrestling enough”
– On TNA not acknowledging Russo was working for the company: “have the balls to say Vince Russo is writing your show”
– On Russo and Spike TV taking jabs at each other: “It’s like we are children again”
– What was Russo watching backstage at a TNA PPV?
– On his relationship with Eric Bischoff and Hulk Hogan
– His opinion of Dixie Carter, personally and professionally
– How the creative process has changed over the years in TNA
– Thoughts on the Aces and Eights faction
– Thoughts on Jeff Jarrett starting a new wrestling promotion
– Why WWE doesn’t hire more former TNA talent
– Would Frankie be interested in signing a WWE developmental deal?
– On poor TNA attendance figures: “A lot of people didn’t even know we were in town!”
– Frankie’s opinion of the WWE Network
– TNA’s future
– Update on Traci Brooks
– Frankie’s opinion of Sons of Anarchy and Star Wars!
– And much more!

Frankie is available for bookings at Kazbookings@gmail.com.

You can also listen to the Gerweck Report via tunein, Stitcher and on Spreaker

Earlier on Thursday, Game Changer Wrestling announced their new sister promotion on the West Coast. A Fights will…

Jeanie Buss discusses the relaunch of WOW: Women of Wrestling

Jeanie Buss, the President and controlling owner of the Los Angeles Lakers, along with Tessa Blanchard and WOW…