AS I SEE IT
Bob Magee
Pro Wrestling: Between the Sheets
PWBTS.com

So it’s Wrestlemania weekend, lots of activities to push World Wrestling Entertainment’s annual wrestling extravaganza. Vince McMahon insures everyone is on their best behavior as they wade through the media frenzy that always seems to take place.

And what does the voice of his flagship TV show and participant in his hottest angle do? Cole goes on his Twitter (done 99% in character) and refers to Josh Matthews as a “fa##ot”. 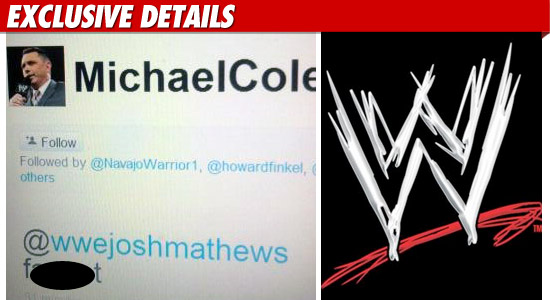 This, only days after the WWE and gay/lesbian rights organization GLAAD teamed to work together to curb homophobic slurs in wrestling (this after some much milder comments in a Monday Night RAW promo by John Cena),

After TMZ.com went public, Cole yanked the tweet and apologized, posting: “I apologize to any and all who were offended by my tweet toward young Josh Matthews. It was obviously not meant the way it was taken. I was not ordered to apologize. I said I am sorry because I am. Now can I get back to being a character again please?”
WWE publicly apologized: “The WWE and GLAAD announced a partnership on March 17 to try and put an end to bullying based on sexual orientation after a series of homophobic taunts was made by wrestler John Cena….WWE takes this issue very seriously, and has already spoken with our talent about these incidents. We are taking steps and working with GLAAD to ensure that our fans know that WWE is against bullying or discrimination on the basis of sexual orientation…. WWE has alerted GLAAD to the situation and spoken to Michael Cole about his post. He has removed it and apologized for using hateful language. Michael will be included in the training session being done by GLAAD. WWE takes this very seriously and is against discrimination of any kind based on sexual orientation, gender, race, religion or other.”

Um, so just HOW do you take a word like that?

Who thinks Michael Cole wasn’t made to apologize….quickly…by WWE? Further, who thinks that if Michael Cole wasn’t the hottest heel in the company and in one of the major angles in Wrestlemania, he might not have a job right now? It wouldn’t be the first time that Vince McMahon fired someone for doing something stupid out of the ring.

Either Michael Cole has to be totally lacking in judgement in saying this to try and get over his heel character, or this was some sort of weird way of Vince McMahon trying to take a quick swipe at GLAAD. In the days before WWE went public, Vince McMahon wouldn’t have publicly apologized for anything. It seemed just the way he did things. Now with the company a publicly held company, and with his wife perpetually running for the Republican nomination for US Senate from Connecticut…he has to do those sorts of things.

Meanwhile, in more news reported on TMZ…TNA’s Kurt Angle was arrested after the local highway patrol in Grand Forks found Kurt Angle sitting in his car in the median separating lanes. Angle is reported to have told police that he had hit an icy patch on the road. They smelled alcohol on his breath, and Angle failed a field sobriety test. Since the police didn’t actually see Angle driving, they couldn’t charge him with DUI, but did charge him with being in control of a motor vehicle while intoxicated.

Angle responded on his Twitter: “I was not drunk. I was in ice storm and my car slid into three feet of snow median. I called police for help. They had other plans. I was stuck and wanted to go to my hotel. I was not passed out drunk. I was coherent. I’m sorry if I let you down. Don’t believe everything you read. My life is good and this is a speed bump in the road. The truth will come out. God bless. I take responsibility for this. My job is to stay clean and never put myself in jeopardy. TMZ blew it out of proportion. After my hearings, I will give you proper story.”

Um, so if you WEREN’T drunk, Kurt, just what were you taking responsibility for?

That evening, Combat Zone Wrestling presents the tenth annual “Best of The Best” tournament, with a scheduled 7:30 pm belltime.

Along with the Best of the Best tournament, a Dream Death Match will take place with the CZW return of “Crazy Monkey’ Jun Kasai vs. Danny Havoc, and a six-man “Ultimate Jeopardy” style match with CZW Tag Team Champions The Briscoe Brothers and Devon Moore vs. Philly’s Most Wanted and CZW Champion Robert Anthony

Tickets will be available through the CZW Pro Shop at this link.

CHIKARA Pro Wrestling comes to the world’s most famous Bingo Hall for King of Trios 2011 on April 15-17. Belltimes are 7:30 pm on Friday and Saturday and 4:30 pm on Sunday for the finals. All 16 trios will be in matches the first night of the tournament, which is Friday, April 23. The surviving eight teams advance into Night 2,and the 4 remaining teams will face off until just one remains on Sunday afternoon, As the participants are confirmed for the tournament, you’ll see them listed on this very page. There will also be non-tournament matches featuring wrestlers eliminated from King of Trios on the last two nights.

Major League Wrestling has announced an “open door policy” for free agents. You can read the full announcement…