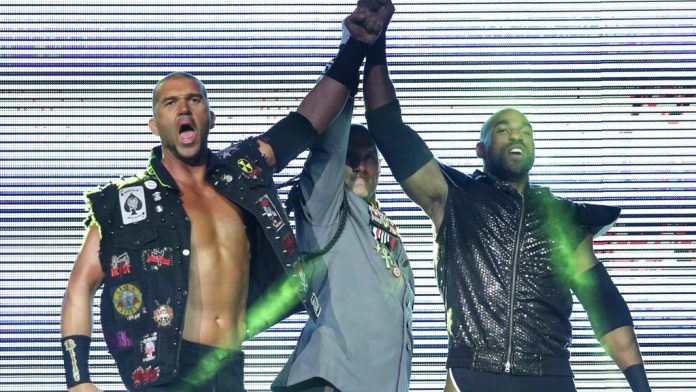 — Chris Sabin defeated Silas Young in a match to determine to the No. 1 contender for the ROH World Television Title

Sabin, best known as a tag-team wrestler as one-half of The Motor City Machine Guns with Alex Shelley, was coming off a solid showing in New Japan Pro-Wrestling’s Best of the Super Juniors, where he defeated the likes of KUSHIDA, Dragon Lee and El Desperado. Young, a two-time former ROH World Television Champion, was looking to get back on track.

Sabin outwrestled Young early and hit a springboard tornado DDT for a near fall. Young came back and gained a near fall, but Sabin quickly regained the advantage and hit Cradleshock for a convincing victory.

As Sabin celebrated in the ring, ROH World Television Champion Punishment Martinez walked onto the stage and raised his championship belt as he glared at Sabin.

Scurll targeted the fingers on Helms’ left hand that Scurll had broken in an earlier confrontation. Scurll stayed on the attack by applying a Japanese stranglehold and hitting a lungblower for a near fall. Helms answered with a Mordifier for a near fall and then Eye of the Hurricane for another near fall.

Later, Scurll applied the finger break on Helms’ right hand. Helms came back with a super neckbreaker for a near fall. Scurll shoved Helms into the referee, and while the referee had his back turned, Scurll kicked Helms low and then pinned him with an inside cradle.

Not surprisingly, bitter rivals Page and Kazarian began brawling at the beginning of the match even though they were not the legal men. The action throughout the bout was fast and furious, as each of these outstanding teams got on a roll at various points.

After a flurry of high-impact moves from members of all three teams, BUSHI went to spit mist into Daniels’ face, but Daniels ducked and the mist went right into referee Todd Sinclair’s eyes. Daniels and Kazarian hit Celebrity Rehab on BUSHI, and as Daniels made the cover, Kazarian grabbed the hand of the blinded Sinclair and forced him to make the count. BUSHI got his shoulder up at two, and Kazarian instinctively stopped Sinclair from hitting the mat a third time.

Daniels set up for Angel’s Wings, but Mark Briscoe came down to the ring and jumped on the apron to distract Daniels. As referee Paul Turner — who had replaced the blinded Sinclair — directed his attention to Mark Briscoe, Jay Briscoe slid into the ring and nailed Daniels in the back with a chair. BUSHI then hit a Codebreaker off the middle rope on Daniels for the win.

It was a measure of revenge for the Briscoes after SCU had attacked them with a chair after the Briscoes’ successful title defense of their ROH World Tag Team Titles against The Young Bucks at the Best in the World pay-per-view five weeks ago.

“I believe Ole Anderson and Dusty Rhodes said it best: It never ends, it will never end.”
— ROH commentator Ian Riccaboni on the hatred between Frankie Kazarian and Adam Page

Raw Underground and new matches announced for this Monday’s Raw