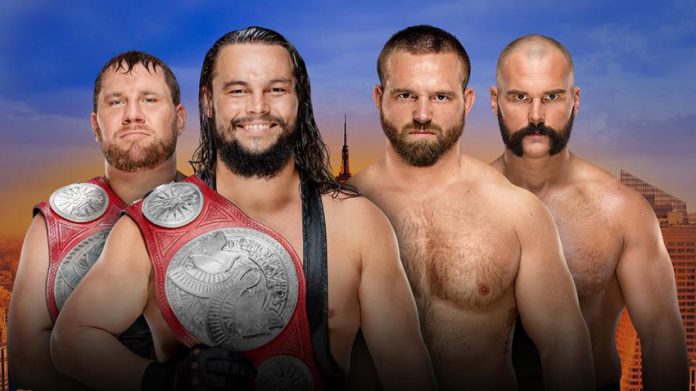 Backstage segment where Rusev tells Aiden English to stay behind for the next match.

Rusev and Almas go back and forth early, with Almas doing his pose in the ropes. Rusev unloads with shots in the corner, loud “Rusev Day” chants. Vega with the distraction, allowing Almas to send Rusev into the ringpost and begin to work over the arm. Rusev fights back, but Vega pulls Lana off the apron to stop a tag. Almas hits a Corner Destino out of the corner for 2. Rusev blocks another Corner Destino and sends Almas crashing down outside. Ladies get the tags in and Lana mounts a comeback, hitting a bulldog and a Spinarooni, ala Booker T. Neckbreaker gets 2. Big slam gets another 2. Vega begs off, but sends Lana into the corner. Vega with a Step-Up Kick and goes for the Basement Meteora, but Lana with a Machaka Kick. Almas distracts Lana, then avoids Rusev, sending him into the barricade. Lana slaps Almas, but Vega rolls her up using the ropes to steal the win.

Gulak’s stablemates, The Brian Kendrick and Gentleman Jack Gallagher, have been banned from ringside per 205 Live GM Drake Maverick. Feeling-out process early. Gulak blocks a Backflip Headscissors, but Alexander avoids the Gu-Lock and hits a dropkick. They brawl at ringside until Gulak with a big push kick and begins to take control, hitting a draping neckbreaker across his knee outside. Gulak with a hot-shot across the apron and works over Alexander’s neck. Gulak gets a nearfall. Gulak with a Hangman’s Stretch applied, but Alexander gets out and fights back. Alexander comes back with a Spring-In Flatliner. Alexander mounts a comeback, hitting a series of right hands and a flip dive outside wiping out Gulak! Gulak stops a springboard, then goes for the Gu-Lock while Alexander is in the ropes, breaking before the 5 count. Gulak gets a close 2. Gulak goes for the Gu-Lock again, but Alexander blocks it and hits his spinning back elbow. Alexander with a Sole Kick, but Gulak with a big slap. Gulak rolls through a Sunset Flip and pins Alexander for 2. Gulak then catches the handspring kick with an Ankle Lock applied. Alexander gets out, but Gulak counters a Spanish Fly with a pin attempt for 2. Alexander then counters Gulak’s pin and gets the win to retain the title.

Good match from Alexander and Gulak, but not a fan of the result. Like Cedric, but it was time for Gulak to see what he could do with the championship. Oh well. – JN #Summerslam

Revival go to work on the champions early, going after Dallas’s leg and hitting Axel with Shatter Machine. Revival work over Dallas until Axel makes the hot tag and mounts a comeback. Revial takes back over, but Dallas trips over a Dawson cradle on Axel, reversing it and retaining the titles for B-Team. WOW!

Champions celebrate in shock and amazement after.

Fun comedy from B-Team and Revival and the champs' lucky streak continues. Match was fine for what it set out to accomplish. Good pallet cleanser for the main card. – JN #Summerslam

What did you think of the #Summerslam Kickoff Show Matches tonight?

What was your favorite #Summerslam Kickoff Show Match tonight?

AEW announces 16 matches for this Tuesday’s Dark on YouTube