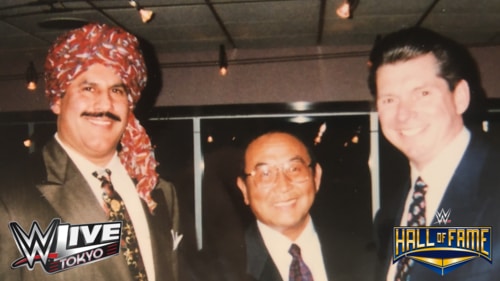 WWE has announced on its Japanese website that they will be honoring WWE Hall of Famer Hisashi Shinma on Friday, June 28 as part of their weekend festivities in Japan.

Shinma was inducted into the Legacy Wing of the WWE Hall of Fame this past April the night before WrestleMania 35.

Known as Mr. Shinma, he was the on-screen president of the then World Wrestling Federation from 1978 to 1984 before being succeeded by Jack Tunney. Outside of WWF, Shinma is also credited as helping to bring New Japan Pro Wrestling to prominence and creating the Tiger Mask gimmick.

Conrad Thompson sent out a tweet on Friday that started Bruce Prichard was rushed home for emergency oral surgery. At the time, Prichard was not doing well and was advised against flying. Prichard will not be backstage for tonight’s WWE Stomping Grounds PPV.

Prichard would later send out a tweet thanking everyone for the well wishes. He also said he had 6 teeth pulled and the doctors had to drill into his sinuses.

On behalf of the staff of Wrestleview.com, we wish Bruce Prichard a very speedy recovery.

.@bruceprichard flew home from TV for emergency oral surgery this week. It didn’t go well. He is still in great pain and the doctor advised against flying. So he will be out of commission for a few more days. Today @tonyschiavone24 narrates a Best Of @PrichardShow: pic.twitter.com/hn62R7aNtd

Thanks for the well wishes. Ended up with 6 teeth pulled and had to drill into sinuses. In pain and on the mend . Should be good in a few days

IMPACT announces the return of Lockdown, Will stream live on IMPACT Plus March 28