Drew McIntyre took to Twitter to make the announcement, and WWE announced it on their website, which you can check out below.

As WWE Champion it is my honor, on behalf of @WWE, to celebrate the 100th birthday and extraordinary achievements of @CaptainTomMoore with a personalized WWE title. Happy birthday sir, and thank you. #WalkWithTom #CaptainTomMoore pic.twitter.com/UIRkTBpTnd

Captain Tom Moore’s incredible determination has made him a true people’s champion, and now Drew McIntyre is set on making that title official. The WWE Champion is gifting the World War II veteran a custom WWE title to commemorate Moore’s 100th birthday and recognize all of his impressive contributions to society.

Captain Tom has inspired people across the world with his recent fundraising efforts for the United Kingdom’s National Health Service (NHS), which began with a sponsored 100-lap walk around his Bedfordshire, England garden. Moore’s galvanizing trek has already raised over 29 million British pounds for the NHS. Captain Tom wasn’t finished there, as his rendition of “You’ll Never Walk Alone” with Michael Ball and the NHS Voices of Care Choir helped earn him the distinction as the oldest artist to reach the top spot of BBC Radio 1’s The Official Chart.

McIntyre told the UK Media outlet Metro, “I am proud that WWE has created a WWE Championship title for Captain Tom Moore featuring personalized side plates to celebrate his 100th birthday and commemorate his achievements for the NHS. He is a true hero who stepped up when his country called in World War II and who stepped up again today with the same selfless courage and determination to help others. At WWE, our mission is to put smiles on people’s faces around the world. Captain Tom Moore has achieved that by uniting millions across the world in support of his truly outstanding fundraising endeavors. Captain Tom, I look forward to shaking your hand in person someday.”

The WWE Universe joins McIntyre in wishing Captain Tom a wonderful 100th birthday and offers appreciation for continuing to inspire us all.

For more on Captain Tom Moore and information on how to contribute to his fundraising – click here.

Eric Bischoff, Jeff Jarrett and Summer Rae all made appearances on last night’s episode of WWE SmackDown, which… 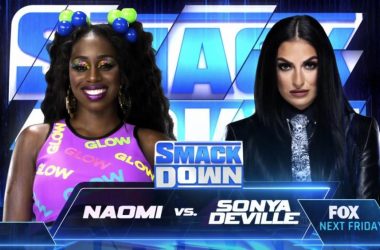 UPDATED 4:45 PM ET Below is a new match and segment added to tonight’s WWE SmackDown on FOX.…