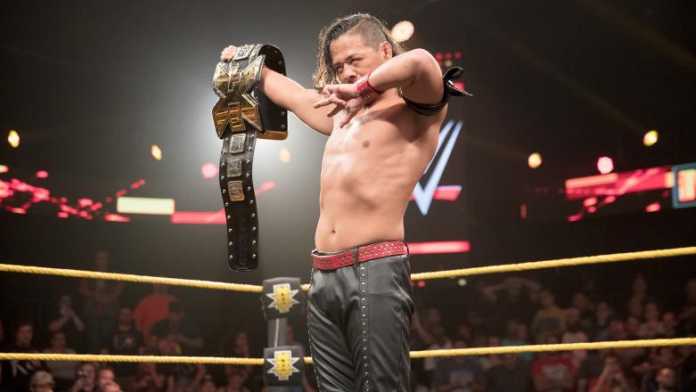 In his first match since winning the NXT Championship, Shinsuke Nakamura gave the NXT Universe and Samoa Joe —who watched from his position at commentary — a sampling of what the “Era of Strong Style” will look like. Here’s a hint: It involves a lot of pain for the titleholder’s opponents.

After being defeated by The Authors of Pain two weeks ago in Brooklyn, TM61 looked to get back on track against a combination of Cruiserweight Classic competitors in Tony Nese & Ariya Daivari. What Nese & Daivari lacked in size, they certainly made up for in speed as they inflicted an all-out assault on the team of Shane Thorne & Nick Miller.

Nese & Daivari looked like longtime tag team partners, cornering Thorne for most of the matchup as they refused to give their Australian foes a second to breathe. Despite their tenacious opponents, TM61 remained resilient, ultimately delivering Thunder Valley for the victory.

For the first time since successfully defending the NXT Women’s Championship against Bayley at TakeOver: Brooklyn II, Asuka spoke out in an exclusive interview with Tom Phillips.

In addition to showing respect to Bayley and delivering a message to her home country of Japan, The Empress of Tomorrow made it clear that no Superstar in NXT is worthy of challenging for her coveted title. The champion bluntly stated, “No one is ready for Asuka.”

With the NXT Women’s division wide open, this is as perfect a time as any for a competitor such as Ember Moon to rise up and make a name for herself. The enigmatic Superstar did just that at TakeOver: Brooklyn II when she defeated Billie Kay in her NXT in-ring debut, and she accomplished it again in her battle against Leah Von.

The “NXT War Goddess” wowed the crowd at Full Sail University, storming past Vaughn with her fiery offense before once again putting away her opponent with a sensational twisting Stunner from the top rope.

Last week, Austin Aries interrupted Andrade “Cien” Almas’ backstage interview, prompting a frustrated Almas to challenge the cocky Superstar to a fight this week. Despite Aries trying to back out of the confrontation by claiming he couldn’t hear the challenge (thanks to his injured ear suffered at the hands of Hideo Itami’s GTS) these two highly respected Superstars ended up squaring off in a heated clash anyways.

Almas showed why he is one of the world’s most respected luchadors with a sensational acrobatic display, but in the end, “The Greatest Man That Ever Lived” earned his moniker by forcing Almas to tap out to the Last Chancery.

Steve Cutler impressed last week with a victory over Kenneth Crawford, but asking for a match against NXT Champion Shinsuke Nakamura may have been a case of Cutler getting ahead of himself. The fiery Cutler managed to inflict a brief attack on the titleholder, but The King of Strong Style ultimately prevailed with ease after hitting the Kinshasa for the pinfall.

The dominant showing from the NXT Champion not only started off the “Era of Strong Style” triumphantly, but did so in front of the former titleholder, Samoa Joe, who sat in on commentary during the match. A solemn-sounding Joe seemed almost humbled as he witnessed Nakamura’s match, later walking away as the Japanese Superstar celebrated his victory in the ring.