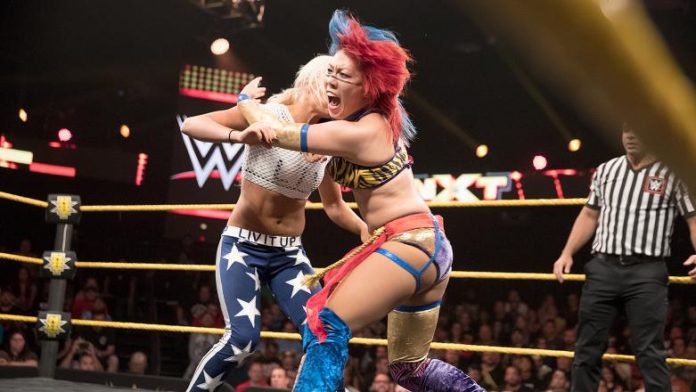 WWE NXT results, Sept. 28, 2016: Can anyone stop Asuka?
NXT Women’s Champion turned back the challenge of Liv Morgan in seconds, leaving the entire NXT Universe wondering if there is anyone who can take down the undefeated Empress of Tomorrow.

ORLANDO, Fla. — This week’s edition of NXT kicked off with a blockbuster announcement from William Regal. The NXT General Manager revealed that the Dusty Rhodes Tag Team Classic will be returning this fall.

The 16-team, single-elimination tournament honoring the legacy of the late WWE Hall of Famer will begin next week on NXT, with the finals taking place at NXT TakeOver: Toronto on Saturday, Nov. 19, exclusively on WWE Network!

Check back with WWE.com every day between now and next Wednesday to see what teams will be entering the second annual Dusty Rhodes Tag Team Classic.

With the aftershock of Regal’s huge announcement still reverberating through Full Sail University, Tye Dillinger took to the ring to keep his hot streak going against Angelo Dawkins. The Superstar who calls himself “The Curse of Greatness” tried his best to keep “The Perfect 10” on lockdown on “Dawkins Island,” but there was no stopping Dillinger. “The Perfect 10” looked impressive as he picked up the win with the Tye-Breaker.

While Dillinger was indeed impressive in victory, his night got a little more … glorious after the bell. Bobby Roode emerged from the locker room and revealed that he wants to win the Dusty Rhodes Tag Team Classic. Roode declared that to win the huge tournament, he didn’t just need any partner — he needed the perfect partner. Appealing to Dillinger’s close ties to “The American Dream,” Roode extended the invitation to join forces. Dillinger accepted, making it clear that he’s doing this “for Dusty,” making the first team in the Classic a perfectly glorious partnership.

With the Dusty Rhodes Tag Team Classic on the roster’s mind, reigning NXT Tag Team Champions The Revival were out to show why they are the “top guys” when it comes to tag team competition. However, the champions’ scheduled contest against the debuting duo of twin brothers Gabriel & Uriel Ealy never started, as Samoa Joe stomped right past Scott Dawson & Dash Wilder and steamrolled over the towering twins. The Revival backed away as soon as a furious Joe glared their way, allowing the carnage to continue.

The submission specialist declared the Ealy brothers the first two victims of Regal’s indecisiveness regarding the NXT Championship. Joe minced no words, warning Regal and the NXT roster that the beatdowns would continue until one of two things happened. “Bring me Nakamura or hand me my championship,” he roared before hurling one of the Ealys into the steel ring steps to make his message crystal clear.

In recent weeks on social media, Mandy Rose has been insulting Ember Moon, claiming that the mysterious NXT newcomer does not have the look of a true Superstar, unlike herself. The blond bombshell had the opportunity to put some weight behind her words in the ring against the fiery Moon.

A visibly disgusted Mandy staggered Moon early on with a hard right forearm, but that only awakened the anger deep within Moon. Ember weathered Rose’s best offense and connected with her trademark diving stunner off the top rope to get the three-count.

Paul Ellering led his monstrous Authors of Pain into action once again this week, and the result was no different than any of the duo’s other matches. Akam & Rezar unleashed pure devastation on their opponents before putting them out of their misery.

After the bell, Ellering grabbed the microphone and declared that the first chapter of The Authors’ chaotic story began with their arrival. The next, he said, would result in a “plethora of pain,” ominously adding that that was all the NXT Universe needed to know.

After Asuka declared that no woman in NXT was ready to step in the ring with her, Liv Morgan seized the opportunity to call out The Empress of Tomorrow. The New Jersey native got the chance to prove herself against Asuka this week on WWE Network. Though Morgan showed a great deal of courage in going right after the NXT Women’s Champion, bravery alone was not enough to put the first blemish on Asuka’s record. The champion took Morgan to the canvas in seconds, locking on a brutal submission hold to remain undefeated. After the win, The Empress of Tomorrow once again evaluated her competition, declaring that “nobody is ready for Asuka.”

Just days after making a big impact on Monday Night Raw, Lince Dorado sprang into action for his first solo foray between the yellow ropes of NXT, squaring off with the hard-hitting Hideo Itami. The “Golden Lynx of Lucha Libre” lived up to his namesake early on, darting around the ring with great agility, evading Itami’s strikes.

However, Dorado’s agility was his undoing, as he eventually dove chest-first into a thunderous kick from his opponent. Though the feline Superstar regained control with a beautiful Asai moonsault to the floor, it was not enough to put Itami away. After Dorado missed a Shooting Star Press, Itami unleashed a flurry of vicious kicks before putting Lince’s lights out with Go to Sleep to earn the victory.

Itami’s celebration would be short-lived, as Austin Aries blindsided him. The sneak attack was cut short, as Itami nearly caught Aries with a kick, sending “The Greatest Man That Ever Lived” into retreat. Though Aries got the upper hand this time, it won’t be long before he finds himself against Itami with nowhere to run.