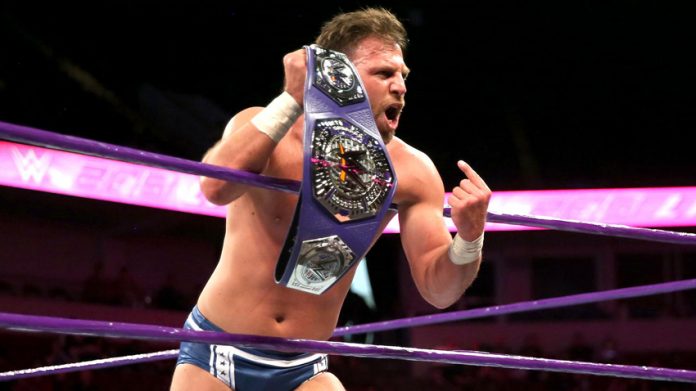 WWE 205 Live results, Feb. 13, 2018: The Cruiserweight Title Tournament brings out a new side of Drew Gulak

On the latest episode of WWE 205 Live, an unhinged Drew Gulak unloaded on his friend Tony Nese before signaling his intentions for the future. Plus, how did Welsh Superstar Mark Andrews fare against former WWE Cruiserweight Champion Akira Tozawa.

Former WWE Cruiserweight Champion Akira Tozawa set his sights on reclaiming the title at WrestleMania, entering the Cruiserweight Championship Tournament against Welsh Superstar Mark Andrews. A semifinalist in the U.K. Championship Tournament, the high-fiving and stage-diving Andrews was poised to not only put himself on the map, but his home-country of Wales as well.

Andrews had The Stamina Monster well-scouted, focusing on his opponent’s leg before applying a unique submission to keep Tozawa on defense. However, the resilience of the Japanese Superstar took centerstage as he turned the tide with impactful strikes and brutal technical holds.

Despite Tozawa’s relentlessness, Andrews’ uncanny ability to escape even the most complex maneuvers switched the momentum, allowing Andrews to reassert his offense, once again focusing on his opponent’s extremities. Unfortunately for the Welsh Superstar, Tozawa lived up to his “Stamina Monster” moniker and battled back, taking out his opponent with a dive to the outside.

Running on pure adrenaline, both Superstars threw everything at each other, knowing what was at stake. Desperate to return to Wales with a first-round victory, Andrews ascended the ropes to attempt a Shooting Star Press. Tozawa rolled away and charged at his recovering opponent with a huge kick, but his attempt at a pinfall was countered, and Andrews finally scored a three-count in an incredible upset.

Last week on WWE 205 Live, Drew Gulak and Tony Nese were confronted by Drake Maverick, who believed neither Superstar was living up to his true potential. The WWE 205 Live GM then announced that the friends and frequent tag team partners would compete against each other in the Cruiserweight Championship Tournament. Despite their history, Gulak and Nese do have some tension following a skirmish a few months prior that left Nese down in the center of the ring.

That tension was evident as Nese kicked away Gulak’s offering of peace before the match began. The longtime allies finally clashed, both attempting to apply pressure to each other’s lower bodies in hopes of gaining the advantage. Eventually, the two started to throw down with hard-hitting strikes. The Premier Athlete used his incredible agility to execute fast-paced moves to take control of the bout.

Nese continued to use his athletic prowess to stay one step ahead of his opponent, but Gulak was able to recalibrate his strategy on the outside, countering a kick and back-slamming Nese onto the floor. This gave Gulak the opening he needed to show off his skillset, targeting The Premier Athlete’s
extremities.

Nese continued to attack, growing frustrated that he could not secure victory. Remaining resilient, Gulak continued to fight, grabbing his opponent by the beard and unleashing a flurry of open-handed strikes. Nese once again nearly secured victory with an incredible dive to the outside. The match continued to the delight of the WWE Universe, as the longtime friends put it all on the table. Displaying his raw power, Nese deadlifted Gulak into a massive slam, but it still wasn’t enough.

The Premier Athlete pressed on, but something clearly went off in Gulak’s head, and he unleashed a brutal attack on his opponent outside the ring, tossing him into the announce table multiple times. Back inside the squared circle, Gulak leveled Nese with a cringe-worthy clothesline before applying the Dragon Sleeper to the nearly unconscious Nese for the win.

Mustafa Ali vs. Gentleman Jack Gallagher and Buddy Murphy vs. Ariya Daivari announced for next week!

WWE 205 Live General Manager Drake Maverick revealed the final two matches of the first round in the 16-man Cruiserweight Championship Tournament. Next week will see Gentleman Jack Gallagher – who Maverick commanded to ditch the suit for traditional ring gear – battle the high-flying Mustafa Ali. Additionally, Ariya Daivari will attempt to advance in the tournament against NXT Superstar Buddy Murphy.

Determined to seize the opportunity for a potential WWE Cruiserweight Championship Match at WrestleMania, NXT’s Buddy Murphy has trained harder than ever and is ready to show the WWE Universe that there is truly a new era of WWE 205 Live.

Maverick made it clear to Gentleman Jack Gallagher that he is not a fan of the suit Gallagher wears inside the squared circle and demanded that his fellow countryman wear more traditional ring gear. Additionally, Drake reminded Gallagher that he is one of the best competitors in the world. The unorthodox British Superstar has a huge opportunity against the talented Mustafa Ali next week; will he heed Maverick’s advice?